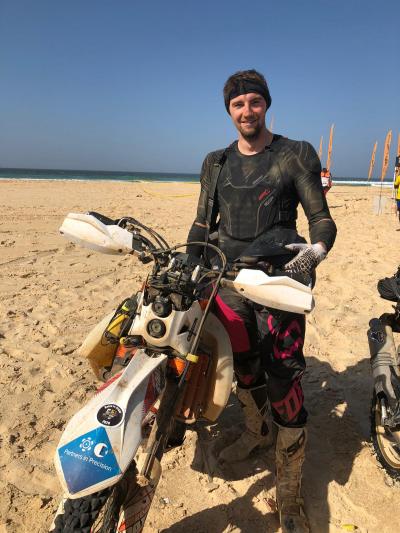 Successful partnerships are based on trust. Bearings supplied by HQW Precision and The Barden Corporation were trusted by Thomas Globe from GB Team Raidassist as he raced from Paris to Dakar in "The Real Way to Dakar" Intercontinental Rally 2020.

The Real Way to Dakar by Intercontinental Rally is an annual off-road competition for motor enthusiasts, following a 6000km trans-African route passing through spectacular landscapes and arduous terrain. This epic race passes through the Atlas Mountains in North Africa, through Morocco, the Sahara Desert, into Mauritania before finally reaching Senegal and ending in Dakar.

The route presents multiple challenges for participants, especially when it comes to keeping their bikes operational. In particular, the arduous conditions can cause issues with the wheel bearings. Subjected to sub-zero temperatures, snow and hail in the mountains, through to rivers, rocky terrain and the sandy heat of the Sahara, it's imperative the bearings do not fail.

The bike, a KTM 450 EXC was fitted with HQW wheel bearings at the front, while Barden bearings were fitted on the rear hub. Specially designed for superior performance, the bearings demonstrated their high reliability, low wear and long life properties throughout the competition. While several of the 36 starters were unable to complete the course, Thomas gave an impressive performance in his first attempt at the rally, finishing in 9th place overall.